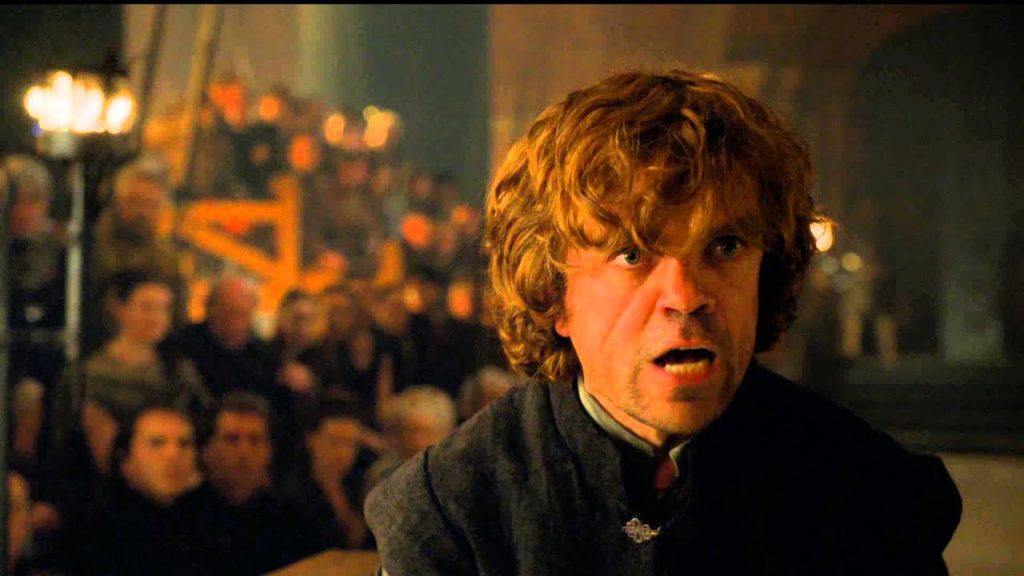 Tyrion Lannister of Game of Thrones fame isn’t a fictional character that one would associate with public speaking. Nevertheless, I previously looked at Tyrion Lannister’s speech from the Battle of the Blackwater. A speech that is a quintessential example of a strong motivational speech. Tyrion did another speech later on in the series and this one is rich in lessons too.

The power of the unexpected

Tyrion’s speech has a huge dramatic impact because it is unexpected. Nobody in the courtroom expects Tyrion to confess anything. When he says “I wish to confess” everybody is taken by surprise and instant audience interest is grasped. Nobody also expects to hear what he ends up saying. You too can achieve the same when delivering a speech or a presentation. Beware though that this is a very advanced technique and one whose effectiveness will depend on your desired objectives for the speech. Unexpected twists will likely work well if you choose to use storytelling techniques. They could also work well for persuasive speaking. Here you could initially lay out the advantages of a position, only to turn against it later. If it is done well, you’ll hook your audience in.

The delivery of Tyrion’s speech is powerful because the emotions conveyed are genuine. This is often very difficult to achieve with prepared speeches and presentations. Why? Because we have a natural tendency to control how we portray ourselves on stage when speaking. Additionally, emotions are difficult to convey unless the content of the speech itself is emotional. Even then it can be easy to get detachment from events happening to someone else or happening in the past. In this speech, raw emotions of frustration and anger are boiling over. As Tyrion himself says, “I’ve been on trial for my entire life.”

End on a high note

“I will let the gods decide my fate. I demand a trial by combat.”

The ruckus that follows indicates that Tyrion met his objective and ended on a memorable high-note. Weak conclusions to speeches and presentations abound. The most common of which is “thank you”. You don’t have to thanks your audience for listening to you, instead, they should thank you for providing them with new insights! Memorable conclusions are action-oriented, delivered with power and dramatic. For something even more memorable, consider using a stunning visual aid to complement your words.

You can find an annotated version of the speech from the TV series here. One for the book version is also available here.