The Ukrainian president Volodymyr Zelenskyy emerged as an icon of Ukraine’s determination in its war against Russia. During the past few weeks, I spent many hours glued to the news, Twitter, looking for information about the war. Despite untold horrors, Mariupol, Kharkiv and Chernihiv suffering under bombs. Ukraine stands strong and its president remains in Kyiv speaking to his country and the world daily. 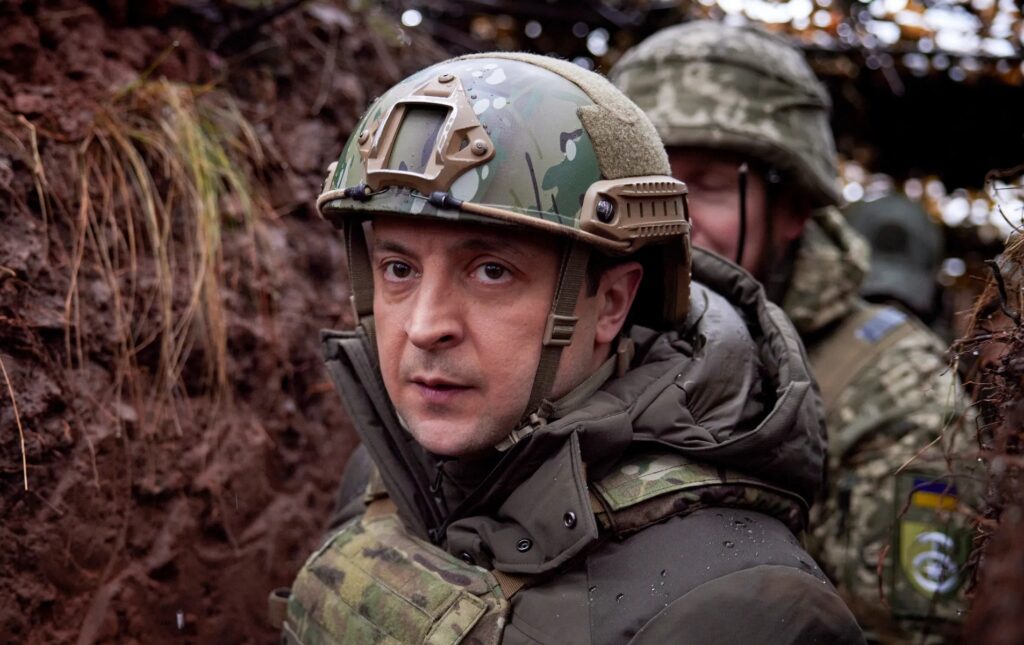 I am truly inspired by fierce Ukrainian resistance in its war against Russia. Recently, president Zelenskyy said that Ukraine was on its way to victory and I believe him. Flooded with western help, with reserves that are still mobilizing and access to materials to fuel its large industrial base. I believe that Ukraine will win the war and that it even has a chance of retaking Crimea and the Donbas. Should it happen, Volodymyr Zelenskyy could be remembered as one of the greatest leaders of the 21st century.

What can other leaders learn from him? Could challenges grander than winning a war await him? Can we learn from these challenges?

Volodymyr Zelenskyy was born in 1978 in the central Ukrainian city Kryvyi Rih, in a Russian-speaking Jewish Ukrainian family. His father was a cybernetics professor, his mother an engineer. He studied law but never practised and instead got involved in the KVN entertainment competition, captaining his team to win the 1997 finals against other teams from the former Soviet Union. Entertainment became his calling from then on, he founded the Kvartal-95 studio which produced shows, TV series and movies. Zelenskyy himself starred in a few movies and continued to perform as a comedian. Some of his work included voicing the Paddington movies in Ukrainian. He shot to notoriety in 2015 with the TV Series Слуга народу, ‘Servant of the people’, (UK readers can view it online on Channel 4) playing a history teacher who becomes president of Ukraine following an expletive-laden rant on corruption filmed by one of his pupils.

Following this series, speculation grew on whether Zelenskyy would attempt a presidential bid. He formally announced his candidacy on 31 December 2018, hours before the incumbent president delivered his New Year’s wishes. Volodymyr’s approach to campaigning was unusual, different from the other candidates and very effective. Traditional media, talk shows and debates were ignored and he instead directly communicated with voters using social media. Campaign rallies became impromptu comedy shows and his political programme was deliberately kept quite vague. He promised honesty in politics, e-Government, reducing corruption and revitalising Ukraine’s economy.

Volodymyr Zelenskyy won the 2019 Ukrainian presidential elections with 73% of second-round votes. His presidency showed some significant accomplishments including land reform but was also criticised for not cracking down harder on corruption. Now, he will be forever remembered as the leader who led Ukraine when it was brutally invaded by Russia.

Ukraine has been at war with Russia since 2014 and suffered 14,000 casualties before the invasion started. A lot of these casualties took place on the frontline in the Donbas region. There, artillery duels, sniper fire, bursts of machine-gun fire were a daily and deadly occurrence. Despite real dangers, president Zelenskyy made many visits to the frontlines since his election. On one occasion, he answered his generals who advised him not to go all the way to meet soldiers in the first line of trenches, with

“They men will hear I came all this way and didn’t come to see them. They’ll be upset.”

Shortly after the invasion occurred, many in the west advised him to leave Kyiv for safety abroad. There was a precedent to this, many western nations closed down their embassies in Kyiv, transferring staff either to Poland or Lviv in western Ukraine. There were fears that Kyiv would fall in days or that Russian saboteurs could assassinate Zelenskyy. Despite real risks and Russians attacking Kyiv with bombs and missiles, he said …

“I need ammunition, not a ride!”

Since then, president Zelenskyy remained in Kyiv, delivering dozens of speeches to Ukraine and the world, which can be seen on YouTube (all are in Ukrainian) and on his Instagram account (with English subtitles). It is quite remarkable that he and his ministers all swapped suits and ties for olive green jackets and trousers. The subconscious message here is that they’re soldiers now and prepared to die for their country if necessary.

The way Ukraine and its people coalesced around its president, with over three-quarters of Ukrainians believing that their country will win the war is remarkable but logical. Why? Because Volodymyr Zelenskyy sent a very powerful message to his enemies, that he will stand and fight and can only be silenced by force. I said in an earlier post that leading from the front can generate social proof and induce others to take action. We’re now seeing this happening right in front of our eyes in Ukraine. An entire nation is now standing with its leader, ready to fight, make sacrifices and win.

“But what if he gets killed? He is not more useful alive than death?” I can hear some of you ask. Right now, everybody in Ukraine is at risk of being killed, from soldiers on the frontlines to infants in maternity hospitals. President Zelenskyy is consequently exposing himself to the same risks as other members of the Ukrainian people. Leadership is not supposed to be a comfortable endeavour. Should Volodymyr be killed, he will likely become a martyr for all Ukrainians, his name could become a rallying cry against the invaders and Ukrainian resistance may become fiercer still. He would consequently continue to lead Ukraine even in death. Such is the power of the mythos he managed to build around him by staying in Kyiv.

President Zelenskyy is a master communicator not afraid of challenging others

The number of speeches and videos delivered by Volodymyr Zelenskyy since the war started is truly astounding. He spoke to the European Parliament, to the British House of Commons, the US Congress and protesters in many European cities. He is additionally present on all major social media platforms and actively posts content there. Some of his videos are prepared in advance, but many are delivered selfie-style with a smartphone and in impromptu settings. I said before that in times of crisis, people look up to their leaders for advice and motivation. By speaking daily to the Ukrainian people and friends abroad, Zelenskyy is doing this very important job of providing reassurance and information. This is a textbook example of what leaders should do when a crisis hits. Nonetheless, what matters the most in communication is not delivery but content, and this is where Zelenskyy truly shines.

A word that appears very often in his speeches is “you”. This is an extremely powerful word to use in communication as it prompts action on the part of recipients. I covered the masterful use of “you” in two fictional speeches before, but many examples exist in Zelenskyy’s speeches.

“I ask all of you to take care of your loved ones. Take care of your brothers-in-arms. I admire you! The whole World admires you. From Hollywood stars to politicians. Today you, Ukrainians, are a symbol of invincibility. A symbol that people in any country can become the best people on earth at any moment.”

In today’s speech to the US Congress, he coupled the use of “you” with points of reference that audience members could relate to. This creates really powerful images in the minds of the audience.

“Remember Pearl Harbor. Terrible morning of December 7, 1941. When your sky was black from the planes attacking you. Just remember that.

Remember September 11th. A terrible day in 2001, when evil tried to turn your cities into a battlefield. When innocent people were attacked. Attacked from the air. In a way no one expected.

In a way you could not stop it. Our state experiences this every day! Every night! For three weeks now! Different Ukrainian cities… Odesa and Kharkiv, Chernihiv and Sumy, Zhytomyr and Lviv, Mariupol and Dnipro. Russia has turned the Ukrainian sky into a source of death. For thousands of people.”

However, what is even more impressive is that Zelenskyy is not afraid of directly challenging others despite his challenges. He repeatedly asked NATO countries to set up a no-fly zone and overcome their fears of what could follow. He reiterated this demand in today’s speech to the US congress.

“To establish a no-fly zone over Ukraine is to save people. Humanitarian no-fly zone. Conditions under which Russia will no longer be able to terrorize our peaceful cities every day and night. If that’s too much, we offer an alternative.”

Pay careful attention to the last bit as it paves the way for a very neat psychological tool that he played on his audience. Here is the next part of the speech:

“You know what defence systems we need. C-300 and other similar systems.

You know how much depends on the battlefield on the ability to use aircraft. Powerful, strong aircraft. To protect your people. Your freedom. Your land. Aircraft that can help Ukraine. That can help Europe.”

Here, he uses a very powerful psychological trick of give and take. He likely knows that western leaders are still too afraid to set up a no-fly zone for fear of its possible consequences. So instead, he presents them with an alternative that is far easier and a lot less risky to implement. He used this technique repeatedly in his many speeches. Moreover, he often coupled it with reminders to western leaders Ukraine currently defend the values that those same leaders claim to represent.

Mr President, your greatest challenge lies ahead of you

Saying this may seem completely counterintuitive, what could be more challenging than leading a country through war after all? … Winning the peace.

When looking at Volodymyr Zelenskyy, I think of another wartime leader whose speeches and defiance went down in history. Winston Churchill, the man who led the United Kingdom to victory in WW2 in 1945 and lost the elections that same year. This happened partly because Winston Churchill failed to plan for what would happen after the war once victory was secured and soldiers returned home. A genuine opportunity to craft a comprehensive national vision for modernising the United Kingdom post-war was lost.

President Zelenskyy greatest task will be to win the peace, to harness the powerful sense of unity that the war brought in decisively modernising Ukraine. The road to Ukraine joining the European Union will be long and tortuous. I will require cracking down on corruption, very large-scale infrastructure modernisation, reconstruction of ruined cities and a revitalisation of the Ukrainian economy. Funds have already been pledged to help Ukraine rebuild. However, without a comprehensive and bold plan for reconstruction. These funds could be wasted, and reconstruction could take decades instead of years.

Soon, Volodymyr Zelenskyy should start to seize the imagination of his compatriots and invite them to imagine what a victorious and newly united Ukraine could look like post-war. Ukraine is a rich land blessed with vast natural resources and the best soils in the World. It additionally is one of only six countries in the world capable of designing and manufacturing jet engines. Ukraine is capable of manufacturing rockets and wide-bodied aeroplane fuselages, something few nations can boast. Ukrainian IT specialists and engineers are amongst the best in the world. Ukraine has all the ingredients necessary to kickstart a post-war economic miracle, a Ukrainian dream. What is more, close to 2 million Ukrainian refugees are now in Poland, a country that opened its hearts and homes to its neighbour. “Let’s surpass our Polish friends” could become a very powerful post-war slogan and dream for the country.