It feels strange to realise that it will soon be one year since we moved online because of the COVID-19 pandemic. Our post-pandemic world will be far more attuned to the idea of working remotely and attending remote meetings with team members, friends and colleagues from all over the world. Meanwhile, new services make it possible to replicate elements of in-person meetings such as sharing food to our new reality of virtual rendezvous and meetings.

However, I don’t believe that the future of public speaking is online. Here’s why.

If you want to speak online and do speeches on any topic that takes your fancy, you will have several hurdles to overcome:

Whereas a year ago if speaking about the merits of owning a cat as opposed to owning a dog took your fancy. All you needed was to go to speaker’s corner on a Sunday morning where an audience would have awaited you. 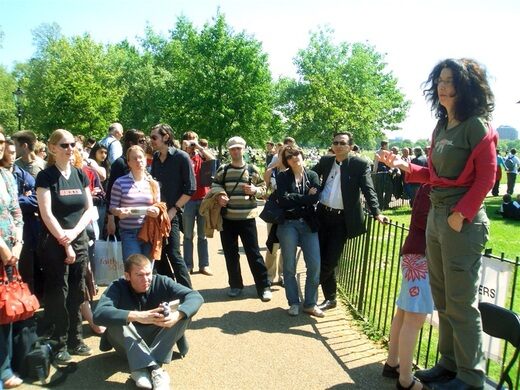 It is near-impossible to replicate the semi-organised chaos that’s speaker’s corner online.

Why? Because an interesting consequence of moving meetings online, is that it has made the task of managing meetings significantly easier. Online meetings, who accesses them and who speaks at them are easier to control than physical ones. Indeed, good Zoom meeting practice also encourages using one dedicated person in charge of looking after technology and attendance. It is therefore effortless to shut down a heckler online, which can be a good thing. But it is equally easier for someone in an online audience to switch off altogether someone speaks; whereas in physical settings it was considered rude to do so.

Additionally, replicating speaking games involving breaking an audience into pairs is also more challenging online. Sure, it is possible via Zoom breakout rooms though the subtle social pressure of seeing other people around us speaking and doing the exercise won’t be there. In a physical environment, only pens and paper are required to get teams and individuals brainstorming and contributing ideas in the anonymity of a group. Online tools to achieve the same exist like Miro, but they aren’t as easy to use as a pen and paper and aren’t always anonymous.

Finally, the technology factor must not be underestimated. I saw many speakers and colleagues purchasing green screens at the start of the pandemic and using them to superimpose themselves on slides while presenting. Yet, installing a green screen requires space, and not everybody has space to do this. I would personally need to rearrange my entire living room if I wanted to set-up a green screen. I’m sure that I am not the only one in this situation.

The inability to see audience reactions is the obvious challenge with speaking online and an almost insurmountable one. I’ve spoken in front of as many as 500 people and delivered workshops to audiences of over 200 participants on occasions. While on stage, you can see, hear and feel the reactions of your audience in real-time. Seeing how your audience reacts enables you to adjust the contents of your speech or presentation on the fly, add extra pauses or vocal emphasis and to engage the audience with props. Bill Gates once famously released mosquitoes on his audience to emphasise a point. Public speaking champion Ricardo Cabete set a wallet on fire to conclude his speech with a bang. I adjusted what I said in speeches and presentations countless times based on the reactions of my audience. Not seeing and hearing audience reactions is especially handicapping for humorous and entertaining speeches as laughter is contagious. Having seen the same humorous speech delivered online and in person in early November, I can attest that it felt more impactful and funnier in person than online.

While nothing prevents speakers from upping their game, incorporating more vocal variety, more rhetorical questions or interacting with their audiences using remote tools. In one year of online public speaking, I have seen very few speakers doing this. In fact, on multiple occasions when delivering a workshop or training, the organisers hadn’t even anticipated the possibility that I would want to try and interact with my audience, somehow.

Could technology one day recreate something like an in-person speaking experience in an online environment? Perhaps yes but we’re not there yet. Interestingly, projecting a speaker as a hologram remotely into multiple rooms simultaneously is a technology that’s already at an early stage of commercialisation. However, bringing the sounds, buzz and feel of a room back to speakers and fellow audience members is a technological step-up from this. Until technology can replicate all of this, online speaking will be mostly a near solitary pursuit. A solitary pursuit done sitting in front of a laptop looking at a maximum of 25 faces in a Zoom meeting; some of which may have their camera switched off.

Connecting with audiences is difficult online

This is the natural consequence of speaking in more controlled environments and of not being able to see how audiences react online. In an age where people are seeking truth and connection, this is a big challenge to overcome. Some online events I attended in the past year asked speakers to record their speeches and presentations ahead of the event. These were then broadcasted to the audience during the event itself. How can speakers be authentic in these circumstances when they can submit a polished recording of what they want to say? They can’t, and people watching will see through this to a large extent.

A key piece of audience interaction that’s impossible to replicate online is eye contact. While looking at the camera does replicate it from the point of view of the audience. It doesn’t from the point of view of speakers and cuts out a key avenue for direct and indirect feedback while they speak. The importance of eye contact in public speaking and conversation is supported by science. Yet, this important part of public speaking and one which took me years of practice to master is now gone with the winds of online speaking.

Finally, there is a saying in public speaking that goes along these lines “within one speech, there is the speech we want to deliver, the speech we delivered and the speech we wished we delivered.” There are often dramatic differences between these three speeches and these are often positive. A good speaker will adapt its speech based on how her or his audience reacts, if there is a connection, and if there is any applause. These adjustments to speeches “on the fly” can dramatically enhance speeches for the better. One of history’s greatest speech, “I have a dream” by Martin Luther King is a perfect example, as it was improvised in response to the audience’s reactions. Had MLK delivered this speech via Zoom, it would be remembered today as just one of many speeches on civil rights delivered in the 1960s.

What’s next for public speaking?

Let’s be honest here, public speaking is performance art and like other performance arts such as theatres; it was wrecked by the pandemic. The good news though is that improving one’s public speaking skills online is still possible, albeit with limitations. Be it online or offline, content is still king, a speech must be clear on what it is seeking to achieve and vocal variety still matters.

It will be interesting to see if technology can eventually replace what was lost by moving online. It will also be fascinating to see how quickly people can readjust to public speaking in live physical environments. I estimate that it may take between 6 to 9 months for speech quality to reach pre-pandemic levels in Toastmasters. I also know several speakers who have admitted that going back to speaking in-person will feel strange and weird at first.

And you reader, what do you think? Do you agree or disagree that the future of public speaking isn’t online?